Rudranath Fraser Photo Permanent Secretary in the Ministry of Foreign Affairs and Foreign Trade, Ambassador Marcia Gilbert Roberts (centre), and Ambassador of the Republic of Cuba to Jamaica, Her Excellency Inés Fors Fernández (left), view the exhibit highlighting diplomatic relations between Jamaica and Cuba over the years, which opened on Monday (December 9) in the Ministry's main lobby, 21 Dominica Drive, New Kingston. Providing details about the display at right is Foreign Service Officer for the Caribbean and Americas, Cleopatra Parkins.
GEORGETOWN, March 31, 2021 - Cuba is the only country in Latin America and the Caribbean developing COVID-19 vaccines. There has been interest in these vaccines within the Member States of the Caribbean Community (CARICOM). In Jamaica, there have been calls for the Government to explore the possibilities with Cuba and it was reported recently that Suriname wants to take a Cuban vaccine.

There is long-standing cooperation between CARICOM and Cuba. There is a CARICOM/Cuba trade agreement. Cuban Soberana (Sovereignty) 02, COVID-19 vaccine seems to be increasingly a good candidate to receive the first approval for general application.

This is a truly commendable achievement for Cuba, a small State, which, among the many, has four (4) vaccines listed by the World Health Organization (WHO) as in various stages of development. It has vaccines among the 23 at the advanced phase 3 in the development process. Soberana 02 is one of two vaccines being developed by the Finlay Vaccines Institute. The others are being developed by the Center for Genetic Engineering and Biotechnology.

Cuba has a population of 11.3 million and its Gross Domestic Product (GDP) in 2020 was estimated at US$91.2 billion with its per capita income at US$6,530. With the impact of COVID-19 and the early restrictions to contain it, the economy contracted by 11% in 2020.

Since the end of the Cold War and the disintegration of the Soviet Union, like other countries in the Caribbean, Cuba has become increasingly dependent on tourist arrivals, principally from Canada and the European Union (EU). Evidently, Cuba is now facing another economic crisis.

Like other Caribbean countries also, Cuba managed COVID-19 infections in the country quite well in 2020 until it began to reopen its borders in November and the cases began to increase. In August 2020, Cuba had indicated its intention to develop a homegrown COVID-19 vaccine. The country currently has recorded 71,584 cases with 414 deaths. The approved local vaccine will first be used to inoculate the Cuban population, at least 6 million people.

Since the 1959 Revolution and the 1962 US trade embargo, Cuba has had to become self-reliant and self-sufficient. Even more so with the reduction of Russian support within the last 30 years. Cuba does receive some support from Canada and the EU. It was present at the recent UK/Caribbean Forum.

In this situation, it is recorded that Cuba prioritized the development of its main natural resource, its people, investing in education and its healthcare sector. The Cuban government emphasized research and development in the treatment of diseases affecting its people and on prevention and rehabilitation. Cuba has developed expertise in bio-technology and immunology with 8 of 13 vaccines administered to children developed and produced locally.

CARICOM countries have benefitted, over the years, from scholarships to have students study in Cuba. Cuban doctors and nurses have been coming to work in the region including recently to assist with COVID, and CARICOM nationals have utilized healthcare services in Cuba. 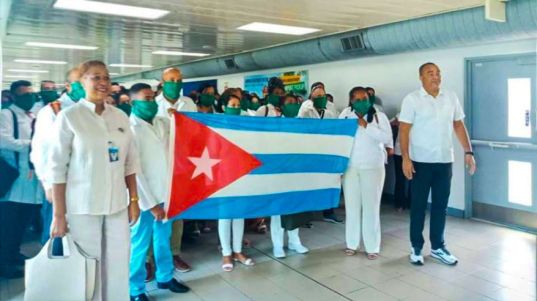 Cuban medical workers arriving in Jamaica to assist with COVID

It was reported that by March 4, the WHO recognized national regulatory body, the Cuban Center for the State Control of Medicines, Equipment and Medical Devices (CECMED), had given approval for the Soberana phase 3 clinical trials to commence. It involves 44,000 people mainly based in Havana, the centre of COVID infections, and 150, 000 health care workers. In addition, 100, 000 doses were sent to Iran as part of the trial. This vaccine can be stored at normal freezer temperatures and requires 2 doses.

The Pan-American Health Organization (PAHO), the hemispheric arm of WHO, has been monitoring this process and seems to be optimistic that Cuba will be the first country in Latin America and the Caribbean to produce a national vaccine.

At the end of the clinical trials, the CECMED will then be in a position to determine whether this vaccine can be approved for general use in Cuba. They are hoping that this will be by June and full-scale vaccinations can commence in August. To be used outside of Cuba, it would be preferable that it is approved by the WHO for emergency use.

It now appears that there is a second of the Cuban vaccines, Abdala, which has just arrived at the phase 3 clinical trials. There is a nasal spray vaccine, Mambisa, in the queue.

At the World Trade Organization (WTO), where discussions have been on-going on a proposal, originally from India and South Africa, for a waiver from patents and other intellectual property rights under the Agreement on Trade-Related Intellectual Property Rights (TRIPS), it is not surprising that Cuba, as a vaccine developer, is not a co-sponsor. It seems this could jeopardize its position as an innovator, producer and exporter. This waiver proposal is not as straightforward and beneficial for all developing countries as it may seem on the surface. As with many things, the devils are in the details.

I am rooting for Cuba, as a small State in the Caribbean, to produce at least one successful COVID vaccine approved by the WHO. Of course, I want to see it sold and administered in this region.

Imagine what we could accomplish as a region if we learned how to better collaborate.