Latin America and Caribbean economies managed to bounce back from COVID-19’s initial economic devastation earlier in 2020. But the pandemic’s resurgence towards the end of the year threatens to thwart an uneven recovery and add to the steep social and human costs.

After the sharp contraction in the second quarter of last year, the brisk recovery in the third quarter exceeded expectations in some larger economies, like Brazil, Peru and Argentina. Manufacturing recovered faster than services. Net exports have recovered to pre-crisis levels while consumption and investment are lagging. 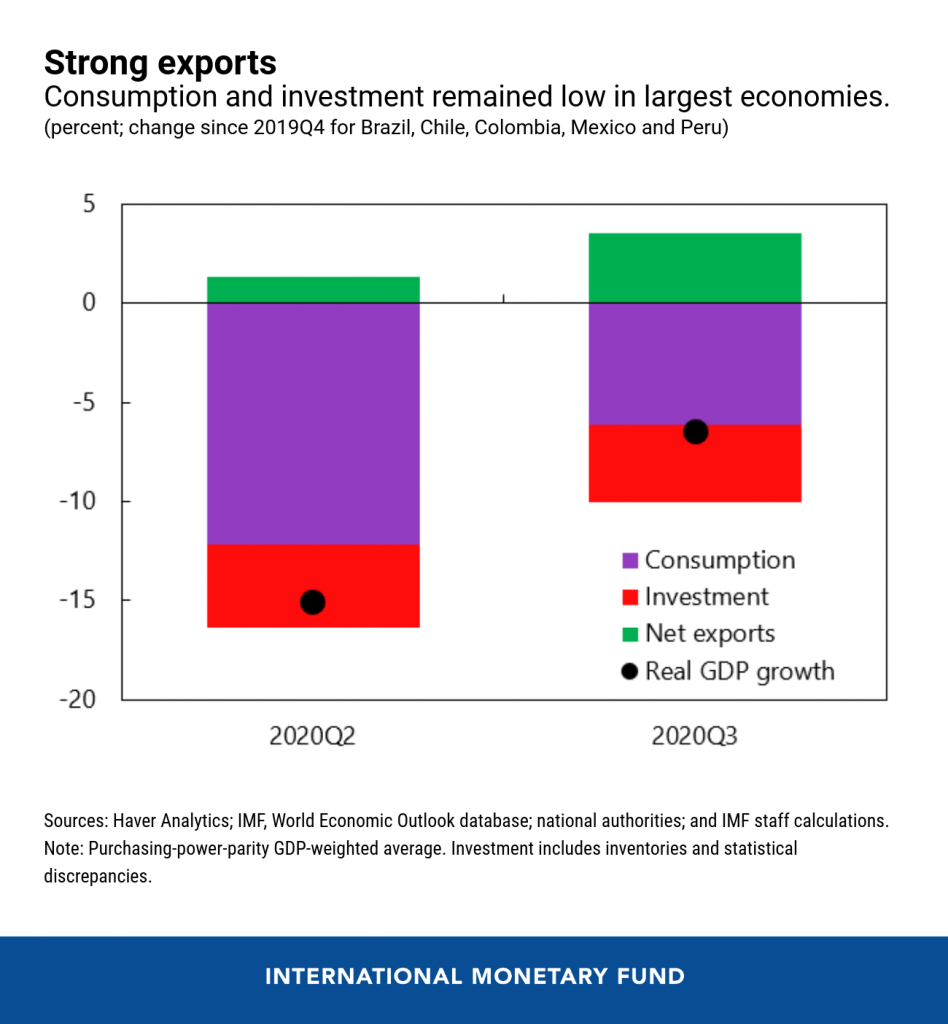 Early indicators, like industrial production and retail sales, pointed to a continuing comeback in the last quarter of 2020, boosted by sizeable fiscal stimulus, easy global financial conditions, and economic agents’ resilience and adaptation to the new reality. The IMF upgraded it’s 2020 forecast for the region from -8.1 to -7.4 percent. 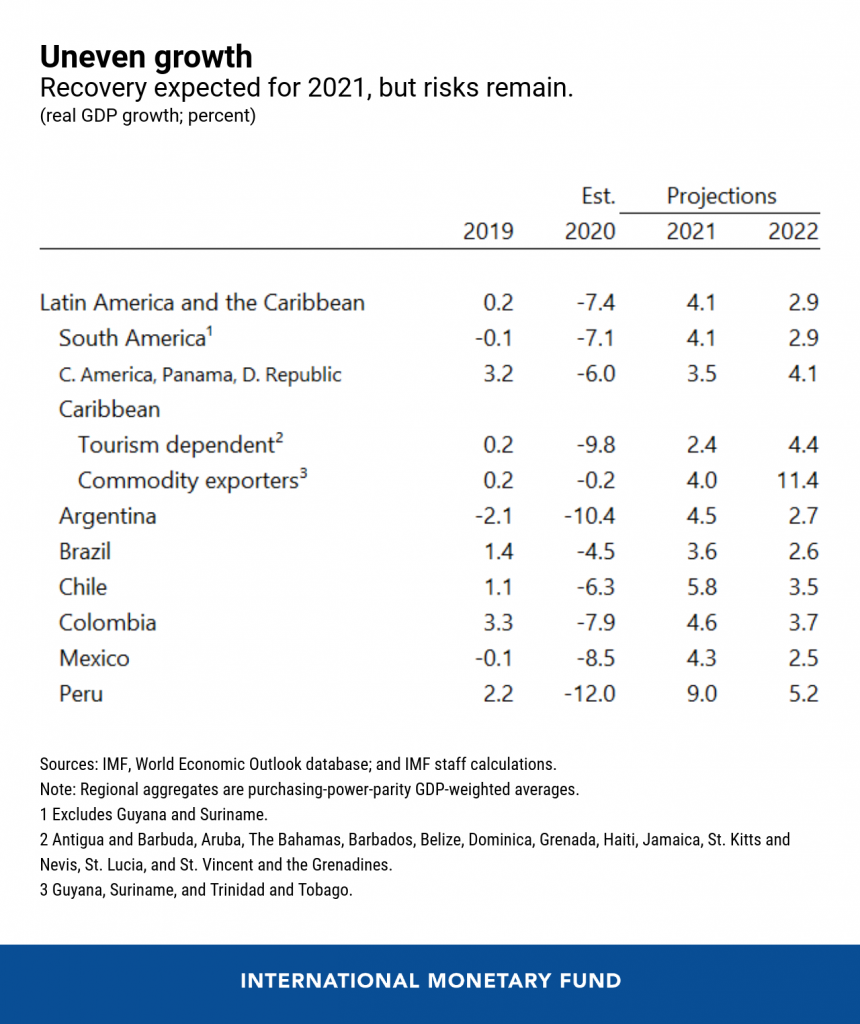 However, this already uneven recovery has been threatened by the pandemic’s recent resurgence and the reintroduction of stricter containment measures in some countries, as well as spillovers from the slowdown in the global economy. New cases and deaths have increased in the past two months in South and Central America, though there are signs of stabilization more recently. Hospital capacity is stretched in many countries and testing capacity remains low compared to advanced and other emerging economies, despite some improvements since August.

Despite this resurgence, we revised our regional 2021 growth forecast upwards to 4.1 percent (from 3.6 percent in October), based on the stronger than expected performance in 2020, an expectation of expanding vaccination efforts, better growth outlook for the United States, and higher prices of some commodities. Growth is expected to accelerate later in the year.

The pandemic’s social and human costs have been immense, and cast a large shadow over this forecast. Over 16 million people are estimated to have fallen into poverty. Employment remains below pre-crisis levels and inequality likely increased in most countries. More than 18 million people have been infected, and half a million have died.

Failure to contain new infections, imposition of new lockdowns, and the consequent change in people’s behavior would all weigh on growth. A weaker rebound in labor markets would cause more permanent social damage. A sudden change in international investors’ sentiment would put pressure on countries with fiscal and external vulnerabilities. On the upside, success in vaccination and containing the pandemic, to which most countries are strongly committed, as well as additional fiscal support would create the conditions for a faster recovery.

The aggregate forecast masks important differences across countries. While growth for this year in Brazil, Mexico, Chile, Colombia, and Peru was revised up, it was downgraded for the Caribbean, from 4 to 2.4 percent, because resumption in vital travel and tourism activity has been much slower than anticipated. 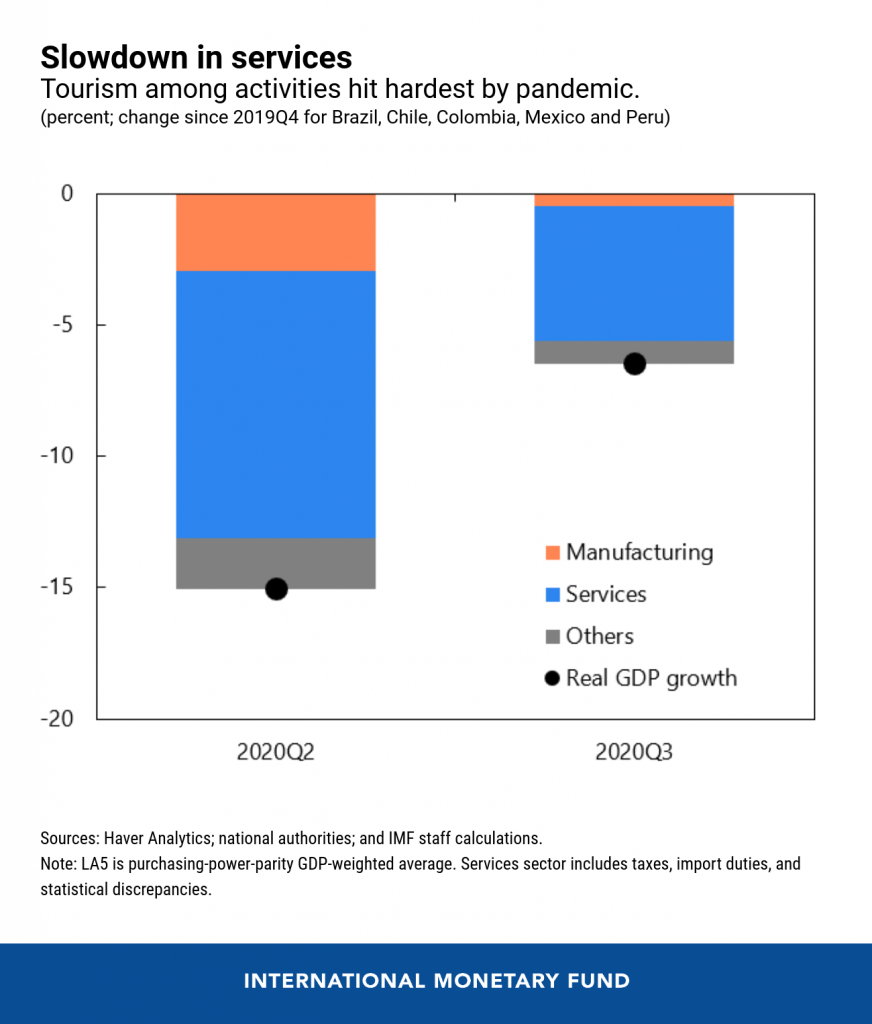 Central America has been supported by robust remittances, rising food prices, and effective policy support. Central America and the Caribbean face the additional risk of natural disasters, as shown by the devastation of hurricanes Eta and Iota last November. 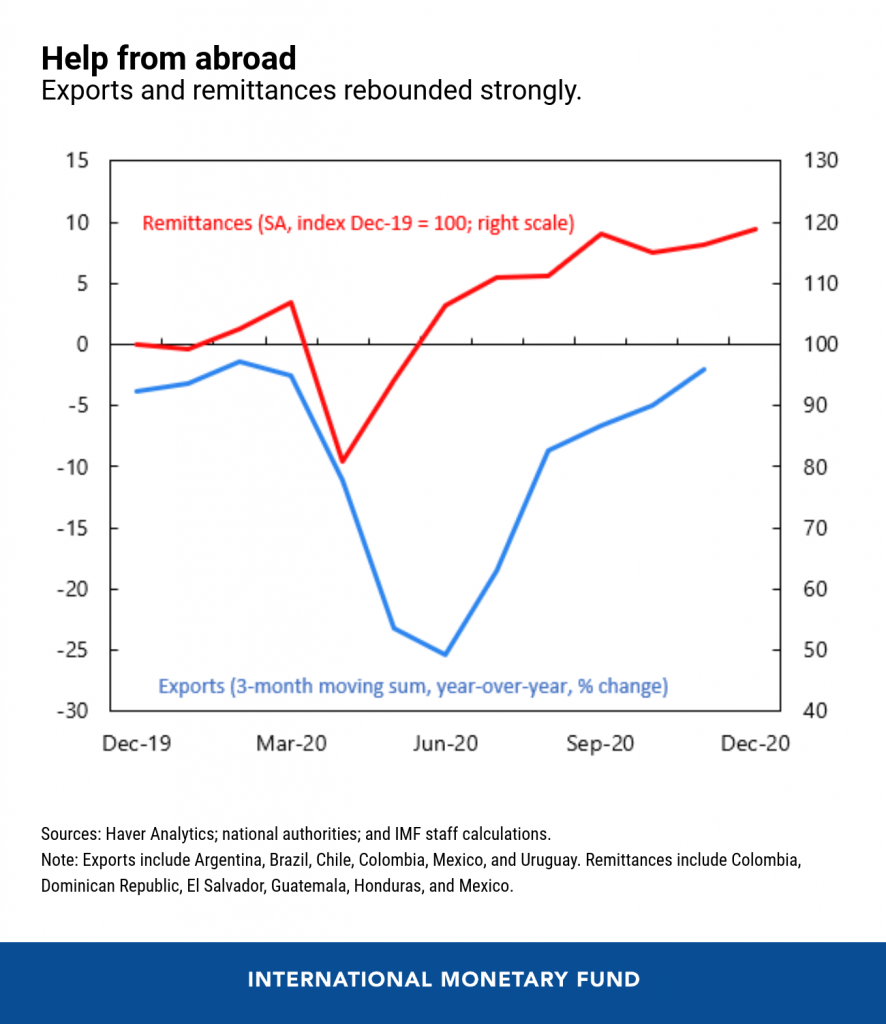 Full recovery is still a long way ahead, though. We forecast that the region will go back to its pre-pandemic levels of output only in 2023, and GDP per capita in 2025, later than other parts of the world. The crisis had a disproportionately large impact on employment with losses concentrated among women, young, informal and less educated workers—with consequences for social indicators.

How to find the space

Given all the uncertainties, countries’ first priority should be to ensure adequate resources for health care systems, including vaccination and testing. And second, continue supporting vulnerable sectors most affected by the pandemic and cementing the uncertain recovery. Removing too much fiscal support too early would jeopardize these goals. Countries with room in their budget for more spending should continue providing support to their economies while making it more targeted, an effort that would certainly accelerate the recovery. Countries with limited spending capacity should prioritize health and household support.

Countries can find the space for more spending in constrained budgets if they can demonstrate commitment to credible and sustainable medium-term fiscal policies once the pandemic is over. The current low interest rate environment suggests that this “fiscal space” might have been underestimated, particularly in large economies, where interest expenses are at low levels despite sharp increases in debt as percentage of GDP.

Fiscal policy should continue to be supported by expansionary monetary policy in countries where inflation expectations are well-anchored. Financial sector policies should continue facilitating liquidity support to the corporate sector, aiming to make it more targeted without compromising financial stability.

The pandemic hit Latin America and Caribbean harder because of its many inherent structural fragilities (for example, more people working in sectors that require close proximity and less in which teleworking is feasible). The region has paid a high toll in terms of infections and deaths relative to its population.  The IMF has been supporting Latin America and the Caribbean with policy advice, technical assistance and financing, providing over $66 billion to 21 countries, including contingency lines. This amounts to over two thirds of the emergency liquidity support the IMF extended globally. And we stand ready to do more.

Alejandro Werner is Director of the IMF's Western Hemisphere Department.

Anna Ivanova is a Deputy Division Chief in the Regional Studies Division of the IMF’s Western Hemisphere Department.

Takuji Komatsuzaki is a Senior Economist in the Regional Studies Division of the IMF’s Western Hemisphere Department.