WASHINGTON DC,  January 5, 2020 - The World Economic Forum’s Future Jobs Report, which maps the jobs and skills of the future, says the workforce is automating faster than expected, with 85 million jobs expected to be displaced in the next five years.

The Future Jobs Report which is published by the International Monetary Fund, tracks the pace of change based on surveys of business leaders and human resource strategists from around the world.  The latest report on The Jobs of Tomorrow by World Economic Forum's Saadia Zahidi, sheds light on the effect of pandemic-related disruptions placed in the broader context of longer-term technology trends.

The Future of Jobs 2020 report has found that COVID-19 has caused the labour market to change faster than expected. The research released  by the World Economic Forum indicates that what used to be considered the “future of work” has already arrived.

By 2025, automation and a new division of labour between humans and machines will disrupt 85 million jobs globally in medium and large businesses across 15 industries and 26 economies. Roles in areas such as data entry, accounting and administrative support are decreasing in demand as automation and digitization in the workplace increases. More than 80% of business executives are accelerating plans to digitize work processes and deploy new technologies; and 50% of employers are expecting to accelerate the automation of some roles in their companies. In contrast to previous years, job creation is now slowing while job destruction is accelerating.

“COVID-19 has accelerated the arrival of the future of work,” said Saadia Zahidi, Manging Director, World Economic Forum. “Accelerating automation and the fallout from the COVID-19 recession has deepened existing inequalities across labour markets and reversed gains in employment made since the global financial crisis in 2007-2008. It’s a double disruption scenario that presents another hurdle for workers in this difficult time. The window of opportunity for proactive management of this change is closing fast. Businesses, governments and workers must plan to urgently work together to implement a new vision for the global workforce.”

Here are the five things you need to know from their findings.

1. The workforce is automating faster than expected, displacing 85 million jobs in the next five years. Automation, in tandem with the COVID-19 recession, is creating a “double-disruption” scenario for workers. Companies’ adoption of technology will transform tasks, jobs, and skills by 2025. Some 43 percent of businesses surveyed indicate that they are set to reduce their workforce because of technology integration, 41 percent plan to expand their use of contractors for task-specialized work, and 34 percent plan to expand their workforce as a result of technology integration. Five years from now, employers will divide work between humans and machines roughly equally. 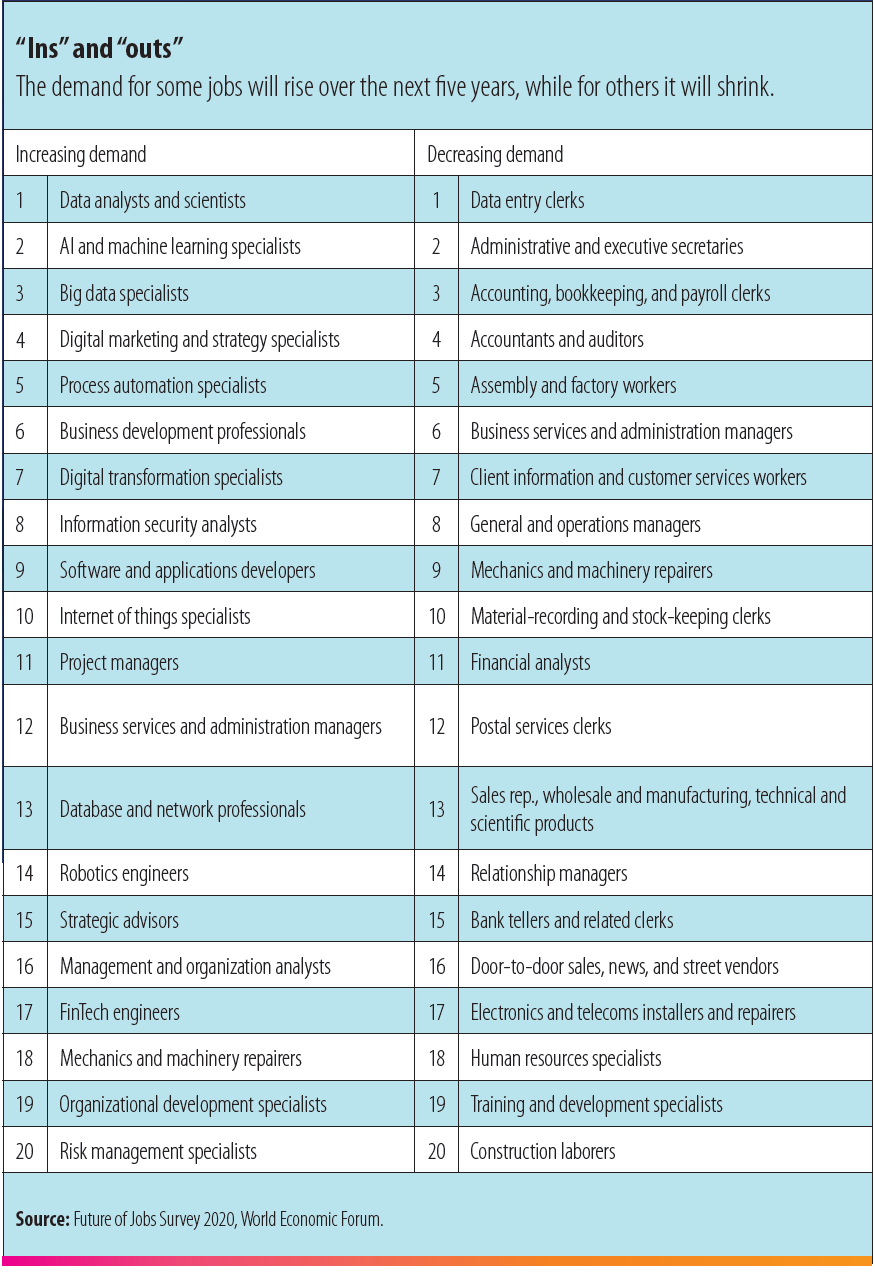 2. The robot revolution will create 97 million new jobs. As the economy and job markets evolve, new roles will emerge across the care economy in technology fields (such as artificial intelligence—AI) and in content creation careers (such as social media management and content writing). The emerging professions reflect the greater demand for green economy jobs; roles at the forefront of the data and AI economy; and new roles in engineering, cloud computing, and product development. The up-and-coming jobs highlight the continuing importance of human interaction in the new economy through roles in the care economy; in marketing, sales, and content production; and in roles that depend on the ability to work with different types of people from different backgrounds.

3. In 2025, analytical thinking, creativity, and flexibility will be among the most sought-after skills. Employers see critical thinking, analysis, and problem solving as growing in importance in the coming years, although these have consistently been cited in previous editions of the survey. Newly emerging this year are skills in self-management, such as active learning, resilience, stress tolerance, and flexibility. The data available through metrics partnerships with LinkedIn and Coursera allowed us to track with unprecedented granularity the types of specialized skills needed for the jobs of tomorrow.

4. The most competitive businesses will focus on upgrading their workers’ skills. For workers set to remain in their roles over the next five years, nearly half will need retraining for their core skills. The survey also found that the public sector needs to provide stronger support for reskilling and upskilling of at-risk or displaced workers. Currently, only 21 percent of businesses report being able to make use of public funds to support their employees through retraining initiatives. The public sector must provide incentives for investment in the markets and jobs of tomorrow, offer stronger safety nets for displaced workers during job transitions, and tackle long-delayed improvements of education and training systems. 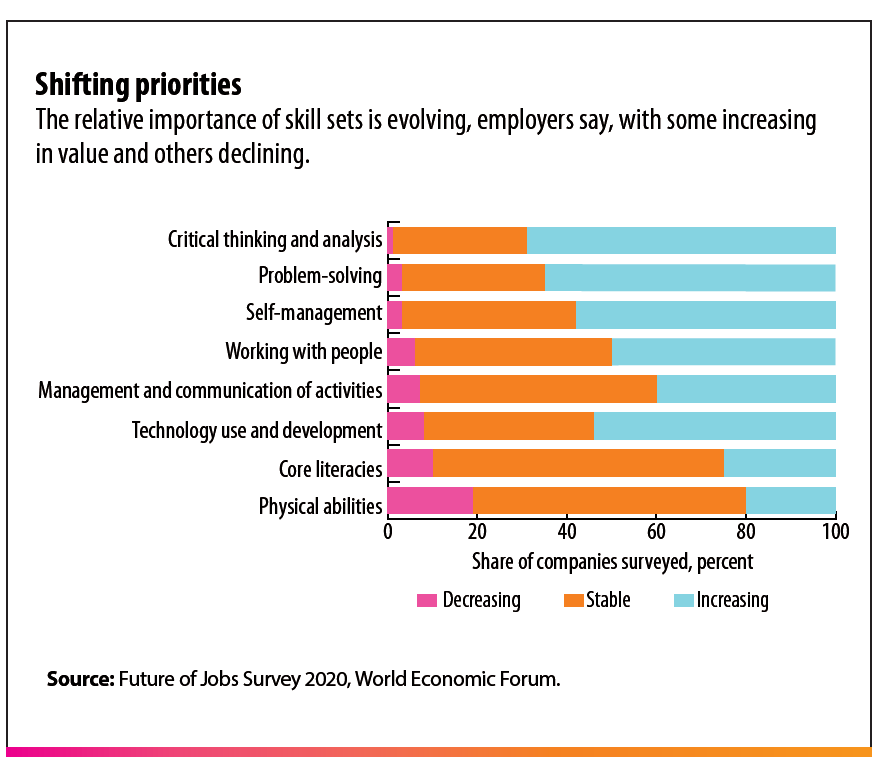 5. Remote work is here to stay. Some 84 percent of employers are set to rapidly digitalize work processes, including a significant expansion of remote working. Employers say there is the potential to move 44 percent of their workforce to operate remotely. However, 78 percent of business leaders expect some negative impact on worker productivity, and many businesses are taking steps to help their employees adapt.

More in this category: « Bitcoin value surges past $30,000 for first time Legalizing marijuana, once a pipe dream on Capitol Hill, takes an important step forward »